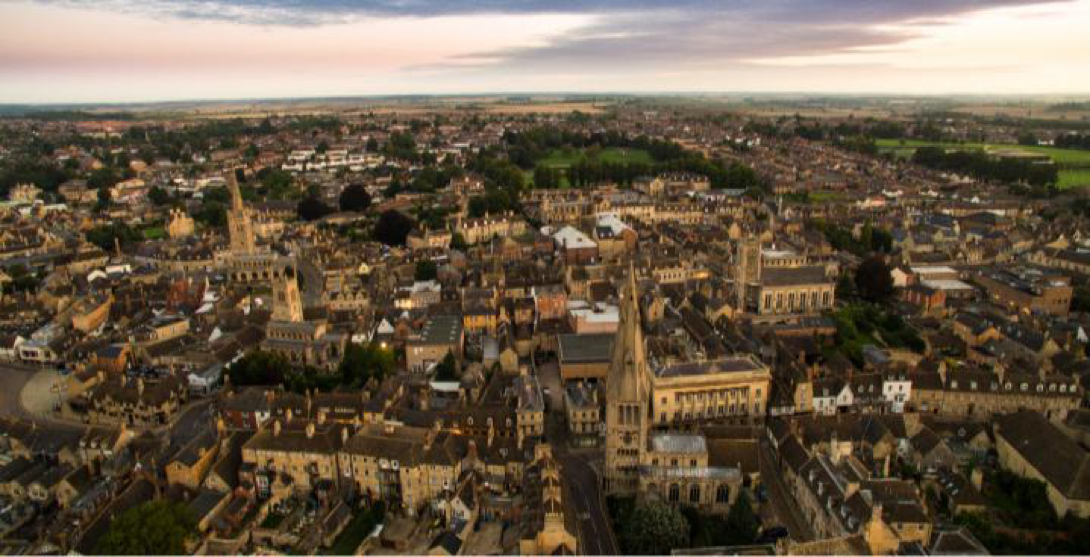 Aerial photography by Matt Musgrave: matt_muz@hotmail.com
As Stamford’s new Neighbourhood Plan is being developed Peter Stean ponders one of the thorny issues which the Plan will need to address: how to balance development of the town whilst retaining its important heritage assets.

No doubt there are pleasant and unpleasant big towns and pleasant and unpleasant small towns. But does the character of a place change with its size? Many people would say that a city of 400,000 souls cannot have the same homogeneity as a town of 20,000. The larger place unavoidably will have a diversity that the smaller won’t; it may contain several shopping areas instead of one, and perhaps it has a number of different areas that draw people looking for entertainment or a choice of eating places.

On the other hand, if one adds 200 extra people to a town of 20,000 the benefits or otherwise may depend on the individual qualities the 200 bring with them, but the overall effect is most unlikely to change the character of the town. Add 20,000 to the town of 20,000 and there would seem to be almost universal consensus that the character will be changed. The difficult question, of course, might be, “At what point in terms of extra numbers does the change occur?” And how does one balance this with the need to house a growing population?

Do some towns have particular virtues that make it desirable to protect them from the effects of expansion? Well, it depends who you ask. Consult the senior members of the Local Authority and, if you can catch them at the right moment, you may not be surprised to hear that they like the larger tax base and greater revenues that come with expansion. A few thousand more homes and an industrial estate or two are really rather attractive. And the industrial estate will sound attractive to the unemployed, too. But what might the majority of those living in the town say?

Now we come to the crux of the matter. There are perhaps 40 or 50 attractive small towns in the country, and if you ​polled the inhabitants of each of them, I’ll bet that a significant majority in every one of them would take the view that their town is special to the point of deserving protection from the effects of development. “Well, maybe a little bit of infill here and there is okay and, indeed, may even be beneficial if it removes an eyesore! But we don’t want 2,000 new houses on the periphery of the town.” And if you are a Planner, you, of course, know in advance how the people will respond if asked, and if you don’t want to hear what they have to say you call it ‘nimby-ism’. (There are, of course, true died-in-the-wool nimbys, those who see the particular view from their windows as never to be violated by change, but there are also those who ascribe a value to a place well beyond their immediate prospect who don’t deserve to be tagged with the label.)

So if you want to save your town from large scale expansion and asking the people will result in an answer that can be discounted as ‘nimby-ism’, who should you ask? Maybe you could call on the ‘great and the good’ who don’t live in the town but might be thought able to bring discerning judgement to bear. In the case of Stamford, we could start with Pevsner and John Betjeman, but perhaps should leave out Celia Fiennes on the grounds that the town has changed more than somewhat since she last visited over 300 years ago. We do know that Henry Thorold, that esteemed and authoritative writer and enthusiast for the ‘best of Lincolnshire’, thought the town of “the right size” as he said just that. But what I think we now need is to identify a few heads of Heritage bodies and a handful or two of prestigious architects, and similar, who are prepared to say it. And I suspect we will need them quite soon in view of the noises being heard about Stamford’s potential for major expansion. So if you know such worthies, do let us know.