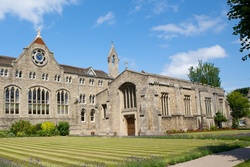 Stamford School Chapel is one of the oldest buildings in Stamford, parts of it dating as far back as the twelfth century From this time until the sixteenth century the building formed the church of Stamford St Paul.

We cannot be at all certain about the size and shape of St Paul's church in the twelfth to fifteenth centuries, though there are remains of stonework from throughout this period. The two east bays of the south wall have been dated to the first half of the twelfth century, but they provide no real clue as to the layout of the building, which may have been no more than a simple rectangle.

In around 1200 a north aisle was added; this can be dated by the design of the columns, capitals and arches. The earliest documentary evidence for the church also dates to this time; it is a deed of 17th February 1200. The church was now probably the length of the present chapel. The east wall also dates from around 1200.

Larger windows were added to the south wall during the first half of the fourteenth century. Late in the fifteenth century new windows were inserted into the east walls of the sanctuary and aisle. Documentary evidence tells us that the church had a tower and belfry, and there was a room over the church door. A narrow stone staircase survives in the south wall and this staircase probably led to the room above the church door, but it is possible that it led to the tower.

In 1548 the parish of St Paul was amalgamated with that of St. George. This seems to have led to the west end of St Paul's church being demolished, so that the building's length was considerably reduced. It was only when it was decided to move the recently founded (1532) Stamford School into what remained of St Paul's church, some time between 1548 and 1553, that the building was saved from complete demolition. The surviving east end became the schoolroom and a new west wall was built.

For nearly four hundred years little obvious change was made to the schoolroom – Old School, as it was subsequently called. In the first two decades of the twentieth century the idea of converting Old School into a chapel was raised and discussed but it was only in 1929, when the school took ownership of Brazenose House for extra classroom accommodation, that the conversion began. The chapel was consecrated on 21st June 1930 by the Bishop of Lincoln.