The Priest's House, Easton on the Hill 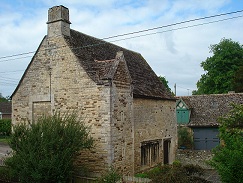 The Priest’s House is one of the National Trust’s smallest buildings. It is located in the attractive village of Easton on the Hill, about 1.5 miles west of Stamford and was built by John Stokes (or Stokke), who was Rector of Easton from 1456 until his death in 1495.  Stokes was William Browne’s brother-in-law and when Browne died before completing the building of the Hospital, Stokes took over the project.

Stokes was also a canon at York and the building probably housed a priest to look after the parish in his absence.  Stokes left money in his will for a chantry priest to pray for his soul and for those of his family. The chantry priest would have lived here until 1545 when chantries became illegal following the dissolution of the monasteries and the associated funds were appropriated by the Crown.

Owing to the Coronavirus pandemic all National Trust buildings are currently closed until further notice.

When National Trust buildings re-open access to the Priest’s House can be obtained every day between 10am and 5pm by visiting one of the nearby keyholders, whose names and locations are clearly shown on the notice board. Entry is free, all are welcome.

Group visits can be arranged by contacting the volunteer custodian, Helen Tomblin – tomblinh@yahoo.co.uk

Access for disabled people is restricted to the ground floor, as the first floor is reached by a stone circular staircase.

Margaret Beaufort and her palace at Collyweston

A temporary exhibition has been set up on the ground floor of the Priest’s House on the life of Lady Margaret Beaufort (1443-1509) who lived in her royal palace, of which nothing remains above ground, in Collyweston. Margaret Beaufort was the mother of Henry Vll and an extremely powerful and influential presence behind the throne. She was also a generous benefactor, including to Cambridge colleges, and regularly took alms to an anchoress who was walled up in a cell attached to St Paul’s church in Stamford. In medieval times the church was very large and important; what little remains of it now forms Stamford School chapel.

As well as recording Lady Margaret’s life the exhibition includes information on the on-going archaeological excavations of the palace site.

The permanent slating exhibition now includes two short videos showing work taking place in Claude Smith's mine in Collyweston - the first, as it was before Collyweston mining virtually stopped in the 1960s and the second, after work restarted using modern machinery and techniques a couple of years ago.

The Priest’s House is located in West Street, Easton on the Hill, PE9 3LS, about 1.5 miles west of Stamford on the A43, Kettering Road. There is National Trust signposting within the village. It is adjacent to the former Rectory which dates from about 1700. The Rectory, which has a handsome south elevation visible from the road, was the birth place of Lancelot Skynner, Captain of the ill-fated HMS Lutine which foundered off the coast of Holland in 1799 carrying a huge cargo of gold that is still waiting to be discovered.  The ship’s bell was found in 1859 and hangs in Lloyds of London’s underwriting room in the City.