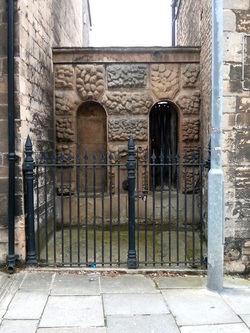 Until the twentieth century, water was supplied to Stamford town from wells and by channels from springs. A spring in Emlyn's Close, located to the north of the town, was channelled to a conduit in St Paul's St. This stood in the middle of the road until it was moved to its present location in 1797, where it can still be seen opposite Conduit House. The conduit was sealed off after a typhoid outbreak around 1900.

During the seventeenth century the maintenance of the conduit was the responsibility of St George's Parish. The rent from the house now known as Conduit House (£25 p.a.) was set aside to provide an income for this purpose. By then the original house, which is believed to date from the thirteenth century, had already been altered considerably. Today, the street front of the house is probably a mixture of eighteenth and nineteenth century features.

The conduit was cleaned up and repainted by the Civic Society's Urban Group in 2014.