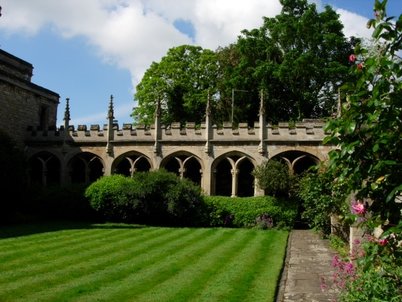 Browne's cloister garden
Stamford Civic Society does not manage Browne's Hospital or arrange visits to it.

The Society provides this page as a courtesy to Browne's Hospital. To arrange visits and for all other enquiries about Browne's, please use the contact details on this page.

How to arrange a visit to Browne's Hospital
To preserve peace and privacy for the residents, the ancient parts of the almshouse are currently available to visit by pre-booked guided tour only. Tours can be booked by ringing 01780 765002. Guided tours cost £5.00 per head with no minimum for the size of groups.* These contact details are for Browne's Hospital, and not for the Society. The Society's contact details are on our Contact Us page.

A virtual visit
We have several galleries of pictures of Browne's Hospital available to view on this website. We also have descriptions of the Common room, Staircase, Audit room and Confrator's room, together with a Stamford Mercury article about the 1960s modernisation.

How to find Browne's Hospital
Browne’s Hospital is in Broad Street, in the heart of the ancient town. It is about 5 minutes’ walk from Stamford Bus Station or 7 minutes’ walk across the Meadows from the railway station and the large Cattle Market car park nearby. There is another, smaller car park on North Street and very limited on-street parking is available in Broad Street (except on Friday, market day). The postcode is PE9 1PF. Google map: goo.gl/maps/5zW7wUovDGv

A brief history
The Hospital (or "Bedehouse") was founded by William Browne, a rich wool merchant of Stamford, and built in 1475 in the reign of Edward IV. With his brother, John, William Browne was largely responsible for enlarging and embellishing the Church of All Saints nearby. He and his wife are believed to have lived in a house adjacent the western side of the Hospital, and so would have been parishioners of All Saints’, where brasses to three generations of their family may be seen.

In 1485, William was authorised by letters patent of Richard III to found and endow the almshouse, but after his death and that of his wife, Margaret, in 1489, the management of the Hospital passed to her brother, Thomas Stokke, Canon of York and Rector of Easton-on-the-Hill, just outside Stamford. Stokke obtained new letters patent from Henry VII in 1493 and the chapel was consecrated by the Bishop of Lincoln on 22nd December, 1494.
The Hospital or Bedehouse — a name by which it was also known — was established as a home and a house of prayer for 10 poor men and 2 poor women, with a Warden and a Confrater, both of whom were to be secular, i.e. non-monastic, priests. The statutes required attendance at chapel twice daily, where masses for the repose of the souls of the Founders were said, but on Sundays it was to All Saints’ Church that they had to go. The title bedesman” or “beadsman” given to the poor men was derived from the beads of the rosary. With the passage of time, a new charter became necessary and this was granted by James I in 1610, and thus Browne’s Hospital may claim to be a Royal Foundation or Royal Hospital.

Visitors may remember that Browne’s Hospital featured as “Middlemarch Hospital” in the film adaptation of George Eliot’s novel, “Middlemarch”, much of which was shot in Stamford. The Hospital is today home to up to 12 residents as specified in the Foundation. The cottages around the beautiful courtyard garden were updated in 1963 to flats, each with a living room, bedroom, kitchen and bathroom.

The Hospital is a Registered Charity, No, 221428, and is managed by a Board of Governors and Trustees, any profit from opening to the public going towards maintaining this Foundation.


For all enquiries about the Hospital:
Please write to the Clerk to the Governors at Browne’s Hospital, Broad Street, Stamford, Lincolnshire, PE9 1PF.

* as at February 2019; subject to change, so please check when booking.