A selection of Stamford's Houses

This page provides pictures and brief details of some of Stamford's private houses. Please note it is not possible to view the interiors! 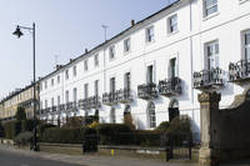 When the Terrace was built it was the only development outside the town walls. It was formerly a Bowling Green owned by Peter Lafarge, just outside St Peter’s Gate. It was purchased for £550 in December 1828 by John Cooper Wallis a veterinary surgeon, who planned to build a Regency Terrace.   The Terrace was not, however, designed by a notable architect.
By 1830 seven of the houses were built and occupied. The first 7 are faced with stucco typical of Regency Houses, the last ones of stone.  Number 8 in the centre was a large impressive house with a first floor drawing room 40 ft in length, now converted to flats. Number 20 is a larger house with the entrance on the west side. 1 to 7 and 9 to 12 are the same plan with the stairs leading up from a hallway. They all have first floor reception rooms which were fashionable after 1770.  Nos 13 to 19 have narrower fronts but are deeper.
Wealthier people welcomed the opportunity to move out of the town. They would also have welcomed the opportunity to have neighbours of the same social class.  All streets in the town were like the nearby St Peter’s Street with a mixture of houses of the well to do, slum courts and working class houses. The townspeople suffered from illness due to contaminated water.  The new houses were advertised to let as being ,“elegant picturesque healthy and delightful”.  The added advantage to residents past and present is the extensive view over the Welland valley.

Number 4 Austin Street, otherwise known as Austin House, stands on the site of a property which was known from 1737 as The Hermitage – “tenement, woolchamber, homested and appurtenances with half an acre of garden.” The owner was the famous antiquarian William Stukeley, Vicar of All Saints’ Church, who let the dwellings and designed the garden. When he moved to London in 1748, Stukeley sold the property to a draper, one George Oliver, and the property was then enlarged by the purchase of four cottages extending eastward to St Peter’s Vale.

Oliver’s son, described by Dr Till in 'A Family Affair, Stamford and the Cecils 1650-1900' as a “notable spendthrift”* sold the four cottages and then, in 1778, the Hermitage itself. The latter was bought by a druggist, Christopher Cocks, who proceded to build the house we see today at a cost of £1,200, including fitments, according to an indenture of 1792. In 1840 Austin House was sold to the Marquess of Exeter who let it to tenants of means who supported the Tory cause.

Internally the house has two large rooms on each storey flanking a central entrance and staircase. Pevsner in his 'Buildings of England - Lincolnshire' notes that the building has a “bleak sophisticated front to the street” but he adds that “the garden front is the prettiest of Stamford”. Divided steps lead from the garden to the porch with its fluted columns above which is an arched window topped with a pediment “like a Chinese hat” according to Pevsner. Either side of the porch and the central window are three storeys of elegant tall shallow bow-fronted windows leading up to the mansard roof. The whole composition, 60 feet from ground to roof is a delight to the eye, a perfect example of Regency elegance.

This house was built in 1698 on the site of a bowling green on the Noel family’s estate. Only the interior walls of the original house survive as it was altered in the mid-18th century and the classical front dates from this time. The Brown family lived here from 1780 to 1841. The site of the nearby St Clement’s church and churchyard was incorporated into the garden in 1832. In 1842 the house was sold after Edward Brown’s death to the Marquess of Exeter for £2500. He bought the house to provide accommodation for his guests when Queen Victoria visited Burghley in 1842. His architect Bryan Browning transformed the North front to overlook the extensive garden and the house was restored. After the visit, the house was rented out by the Exeter family for a hundred years. It was requisitioned in World War II but then not released. It was compulsorily purchased by the Corporation in 1955 to use as a clinic. After some years in this use it was sold by the Council and is now again owned privately. In 1994 the house was chosen for the Fever Hospital in the BBC production of Middlemarch.

The Noel Family of Barn Hill House
This branch of the Noel family lived at Kirkby Malory. William Noel, the younger son of John Noel of Kirby Malory, was a judge and represented Stamford as MP from 1722 to 1747.

Advertisement in the Stamford Mercury newspaper
The following advertisement to let the property appeared in March 1844:
“The residence of the late Edward Brown has undergone extensive alterations and is now finished in a style calculated for the residence of a gentleman of fortune. There is extensive stabling and coach houses and every requisite for a genteel family, excellent garden, lawn and paddock adjoining as a sporting residence. It has particular advantages having the Cottesmore and Milton hunts in the immediate vicinity. Applications to be made at Mr Browning’ s offices, Stamford.” 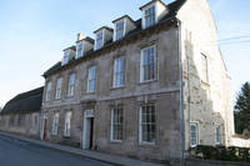 Brazenose House lies in St. Paul's Street, immediately to the west of the site of the mediaeval Brazenose College, which is said to have been taken over by disgruntled students and masters from Oxford, who briefly established a university in Stamford in 1333-35. The old college was pulled down in 1688 and was replaced by Brazenose Hall, which housed a charity school from 1704 until it became the town workhouse in 1739.
The present Brazenose House was built before 1722 and probably took the Brazenose name when the defunct workhouse was demolished in 1822. The thirteenth century Brazenose Gateway, now built into the north wall of the garden, is thought to be the entrance gate to the original mediaeval college.
In 1890, Brazenose House was purchased by Brasenose College, Oxford, in order to acquire its brass door knocker in the shape of a lion’s head, which was believed to have been brought to Stamford during the fourteenth century secession. The original door knocker is now displayed above the high table in the dining hall of the Oxford  college, while the knocker on Brazenose Gateway is a replica. The house subsequently became a girls’ academy until it was bought and incorporated into Stamford School in 1929.
Brazenose House is built of limestone with a Collyweston slate roof.  It consists of two ranges, each of two storeys, along with an attic and a cellar. The street frontage has six bays and five hipped dormers.  A two storey bay window was added at the rear when the house was altered in the 1820s, and the south range overlooking the garden was further extended in 1989-90 when the interior of the property was extensively remodelled.  To the east of the main house is a redeveloped single storey stable building with attic and a mansard roof.