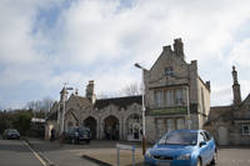 The railway through Stamford was built by the Syston & Peterborough Railway, a subsidiary of the Midland Railway, and opened in 1848.    The station was designed by the  architect Sancton Wood (1816-1886) to resemble a small Tudor manor house. Construction is of local oolitic limestone with a roof of Collyweston stone slates. If you look at the station from the forecourt, the 3-storey central section and the lower buildings to the right were the stationmaster’s house.  Fortress-like walls are nearly a metre thick in places.

To the left of the house is the business part of the station - ticket office, booking hall, waiting room, water closets, parcels office, store room, and other facilities. At the east end note the bell tower with its gilded weather vane bearing the initials SPR.

On the platform side, the canopy on its cast-iron columns probably dates from the 1870s or 1880s, as does the wooden waiting shelter and canopy on the opposite side. The canopy was replaced by a modern glass design in 2017. The lattice footbridge is a standard Midland Railway pattern and was strengthened in 2009.

Beyond the stationmaster’s house is the signal box, moved here in 1987 from its original location about 200m west where it controlled the rail access to the former goods yard. It is a standard Midland Railway Type 2b of 1891.  The extensive goods yard was on land now occupied by the houses in Gresley Drive opposite.