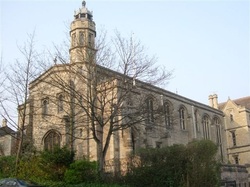 At the foot of the stairs leading to the Audit Room is a brass wall-plate with the Founder’s Arms and a Latin rhyming inscription recording the origin and purpose of the Foundation. The stairs lead to the Ante-room where changing exhibitions are held.

In 2002 this marked the 125th birthday of the High School and recalled the gift by Browne’s Hospital of a substantial sum of money which enabled the creation of the High School for Girls, the enlargement of Stamford School for Boys and the building of the Headmaster’s House. From 1873 until the 1960s, when the revenue of the Hospital became too small for its own needs, a sum of up to £1500 was donated annually to the Endowed Schools who adopted for their motto and badge the device of the Browne (Stokke) family of the stork on a woolsack and the words “+ me spede”.

Also in the ante-room is displayed a uniform which the men were required to wear from the middle of the nineteenth century until the 1950s, soon after which compulsory attendance at Chapel was no longer a rule of the Hospital. Almspersons did not always come from Stamford, but seem to have been drawn from the surrounding area where the Hospital had properties, and it is likely that men living in tied cottages who could no longer work were recommended for a place at Browne’s by the incumbent of their parish.