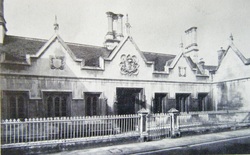 Thomas Truesdale was a Stamford lawyer who died in 1700. He left estates in Morton and Baston for the maintenance of six “ancient and poor men” at a property on Scotgate Stamford, where  each man was to have accommodation, clothes and a weekly payment.  In the early 1830s the Trustees decided on a complete rebuild and commissioned a London architect, Basevi, to provide accommodation for twelve men and a nurse.  The design also incorporated a Committee Room in which the Trustees could meet.  Basevi’s' design cost the vast sum, for the day, of £3,300.

The contractor was James Richardson the first in a long line of Stamford builders, surveyors, architects and auctioneers.  Richardson added a couple more rooms in 1844.
Truesdale’'s coat of arms is above the entrance together with the initials Th and T for his name.  These carvings were done by Nicholl, a local mason.

Francis Peck, antiquarian of Stamford in the 18C makes a comparison between Truesdale and William Browne declaring that they both lived in the same house on Broad St (where No 3 is now), they both founded a Hospital and were both buried in the south chapel of All Saints Church.  Peck gave the following translation of the Latin inscription on the monument:

“Beneath this marble are deposited the remains of Thomas Truesdale of Stamford Gent. known to very many, dear to all, but most dear to his friends.  In the use of English laws and practice of the courts excellently skilled, by his knowledge wherein he made others as well as himself honestly rich; to the poor while he was yet alive he gave often, when he died – always.  In a neighbouring street called Scotgate, he founded an hospital, a fit dwelling for six poor people for ever, and endowed the same with revenues as Baston and Morton in Lincolnshire.
His fame like a tree grows and shall grow to unknown time, for charity, which surpasses poetry, forbids that a person so deserving of praise should ever be forgot.  If gravity, if sobriety, if a mind sincerely honest can any of them procure a fair name, this man made sure of it.  He died October 23, in the year 1700.”

A monument to Truesdale’s first wife, Elizabeth Tooly is next to his own.