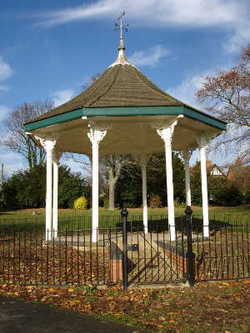 Stamford Recreation Ground was born out of the Stamford Enclosure Act of 1871.

This Act came in to effect in 1875 releasing 1621 acres of common land to the north of Stamford.  The Marquis of Exeter insisted that a public park be created as part of this award, thus about eight acres was purchased at a cost of £1616 14s 1d by the Enclosure’s Valuer and given to the people of Stamford for their pleasure and enjoyment.

The Valuer required the area to be fenced, levelled and drained at the Commissioner’s' expense. However, in 1876, the Stamford Mercury reported that “the site is in a locality that will render the Recreation Ground useless to the respectable portion of the community leaving the enjoyment to those who are not particular about their associations”.

It was not until 1909 that the Borough of Stamford agreed to collect funds and raise the rates by œd to make improvements to the Recreation Ground.  Twelve hundred trees and bushes were planted to ‘beautify the area’ and a bowls pitch, croquet lawn and tennis courts built to separate the northern part from the football and cricket playing areas to the south.

The Bandstand was built in 1910 in time for the formal opening of the park by the Marquess of Exeter. The Bandstand was opened by Councillor Duncomb (Deputy Mayor) on 14 July 1910. He was credited with being instrumental in raising subscriptions for its construction. It is now a Grade II listed building and used for summer concerts. The Recreation Ground is the responsibility of Stamford Town Council, and includes tennis courts and a skateboard park among its attractions.

In a previous version of this page, we incorrectly said that the northern part of the Recreation Ground had been known as Belton Gardens. In fact, there was a private bowls club that met on a green at the bottom of Belton Street and was known as the Belton Gardens Bowls Club. Dolby's Directory for 1962/63 (page 78) shows the Club still there. Subsequently this land was sold for development and the Club moved to the Rec ,where the members played on the public green. They kept the name of Belton Gardens Bowls Club until the club was dissolved some years later.