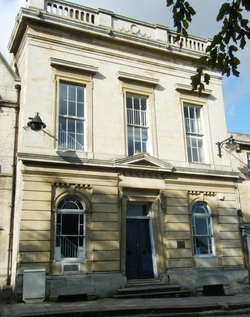 The Institution in St Peter’s Hill was built in 1842 on the site of the Castle Inn by the Marquess of Exeter and designed by his architect Bryan Browning (1753 -1856) in the Greek style. The cornice is adorned with lion heads and it has a most unusual door.  It was built to accommodate the Literary and Scientific Institute with a reading room, a subscription library, a museum and a lecture hall.  There was an apartment for the Curator.  It later had a camera obscura on the roof where people could pay to have a view of the town. When the Town Library opened in 1907 the books were taken there and the contents of the museum sold.  The Institution continued for a few years as a reading room and lecture hall. The Camera Obscura was damaged in February 1910 in a storm and was removed.

The laying of the Foundation stone took place on the 22nd of March 1842.   It was a grand occasion with a procession led by a band, followed by the Magistrates, Councillors, members of the Corporation and friends of the Institution. The Marquis of Exeter laid the stone which weighed several tons and 3000 people attended the ceremony. The Institution opened on the 8th of December.  In 1843 an exhibition of paintings and curiosities was visited by 4000 people.
The library and reading room were open from 9am to 10pm in winter and from 8am to 10pm in summer.  The Institution housed a large collection of stuffed birds and animals, curiousities, paintings and photographs. Lectures included astronomy, Shakespearean readings and geology. There was no indoor lavatory .

The contents of the museum were sold in 1910. The items sold included British, Roman and Medieval pottery; rare coins including 76 silver groats (which had been discovered in Stamford); cases of stuffed birds; manuscripts and books and bound copies of the Stamford Mercury from 1802 to 1809. The sale realised £150.