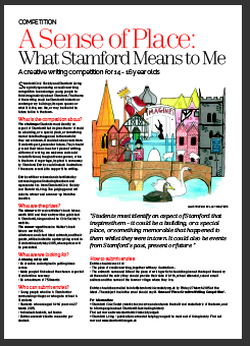 In January 2015, Stamford Civic Society and Stamford Living jointly sponsored a creative         writing competition to encourage young people to think imaginatively about Stamford. The theme of
the writing could be Stamford’s historic or contemporary buildings, its open spaces or what it is like, was like, or may be like in the future to live in the town.

The winner was Megan Waites, who studies at Bourne Grammar School. She won a £100 book voucher for her entry, called Stories.  She told Stamford Living: “I got the idea for the story when I was late for the bus one day…it just came to me out of the blue…coming from a rather plain town in the West Midlands, I have always found Stamford to be such a beautiful place to live.”

Runner-up, receiving a £50 book voucher was Emily Caseley who studies at Stamford High School. Her story, called The Rings of Time, was set in Burghley Park and delved into the past. She told SL: “We often walk in Burghley Park and the old trees there inspired me to think about the past.”

The Judging Panel – comprising Nicholas Rudd-Jones, Miranda Rock, Helen Gould and the eminent sci-fi author Peter Hamilton  – were most impressed by the standard of entries, and had a hard job choosing the winner. 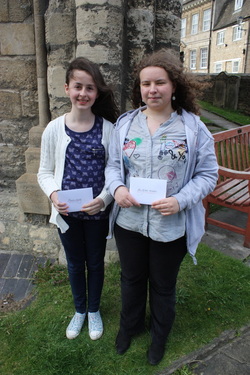 The prizes were presented by Nick Rudd-Jones, editor of Stamford Living and Gwyneth Gibbs, Chairman of Stamford Civic Society on a windy day in central Stamford. Megan is on the right and Emily on the left.

We are delighted to publish both Stories by Megan and The Rings of Time by Emily. We were very struck by how well both fitted the brief, and yet were so very different in style and content. Congratulations to both girls, and to all the other competition entrants.